Among taxpayers who will pay comprehensive real estate tax (special property tax) for housing this year, Seoul residents fell to an all-time low of 51%. They pay 49% of the total tax amount. This means that the tax burden on non-Seoul residents has increased to about half of the total due to the rise in house prices.

The tax burden is spreading across the country, with the amount of taxation soaring 784% in Chungbuk, 651% in Gwangju, and 627% in Jeonbuk. It is analyzed that the surge in house prices has spread not only in Seoul but also all over the country, and local wealthy people have started ‘expedition investment’ to buy houses in Seoul. 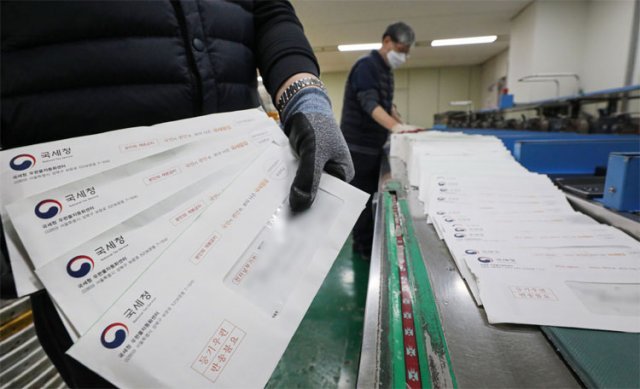 Sending tax bills On the afternoon of the 23rd, employees are sorting this year’s comprehensive real estate tax bills sent by the National Tax Service at the Gangnam Post Office in Gangnam-gu, Seoul. This year, the number of people subject to the property tax on housing sales is 947,000, up 42% from last year. The number of residents outside of Seoul increased to about half of the total. news

According to the “State of Notification of Housing Division by City and Province in 2021” released by the National Tax Service on the 23rd, the number of people who received tax notices in Seoul this year was 480,000, and the amount of tax was 2.8 trillion won. This accounts for 51% of the nation’s taxable income (947,000 people) and 49% of the tax amount (5.7 trillion won). This proportion is the lowest since 2006 when related statistics were collected. These statistics were compiled based on the residence of those subject to taxation. For example, if a resident of Busan owns real estate in Seoul, it will be counted as the taxable number and amount of tax in Busan. Last year, Seoul residents accounted for 59% and 65% of the total tax payer and tax amount, respectively. This year, they fell to 51% and 49%, respectively. In 2006, when related statistics began to be compiled, they each accounted for 78%. In 2006, when real estate was soaring, the soaring property tax was a concern only for Seoulites. But now it has become a problem for the wealthy nationals. After Seoul, Gyeonggi had the highest number of highlanders and the highest amount of tax. This year, 238,000 people will pay 1.168.9 trillion won in tax. This is similar to the amount of tax paid by Seoul residents (1.186 trillion won) last year. This year, the rate of increase in the number of people subject to tax on property tax and the amount of tax in provinces has surpassed that of Seoul. Compared to the previous year, Seoul had the highest rate of increase of 134%, but Chungbuk had the highest rate of 784%. It was followed by Gwangju (651%), Jeonbuk (627%) and Ulsan (525%).

○ It is inevitable to increase the property tax next year

On the 23rd, when public opinion appealed for the tax burden, the government issued a document titled ‘This is the truth about the tax notice,’ and began to evolve, saying, “All of the tax revenue is distributed and used to the provinces, and it contributes to the balanced development of the provinces.”

The public housing price will be announced in April next year, and it is highly likely that the sharp rise in house prices this year will be reflected in the official price. According to the Korea Real Estate Agency, the cumulative increase in apartment prices nationwide from the beginning of this year to the middle of this month was 12.5%. In addition, the realization rate (the ratio of the published price to the market price) of the public housing price, which was 70% this year, will rise to 71.5% next year. The fair market value ratio, which is applied when setting the tax base (the standard on which taxes are imposed), will also increase from 95% to 100% next year. There is a possibility that the published price and the tax base will rise more significantly than the market price. In announcing the budget, the government estimated that the tax revenue for next year would be 6.63 trillion won.

The government has no plans to further strengthen the tax on property taxes for the time being. However, there are forecasts that the tax may be abolished and strengthened according to next year’s presidential election. Presidential candidate Lee Jae-myung of the Democratic Party of Korea announced his intention to review the property tax, including the introduction of a land tenure tax, and Yoon Seok-yeol, a presidential candidate for the People’s Strength, by lowering the tax rate.

Hong Nam-ki Inflation, which rose more than in...