Hunan Daily, October 21 (all media reporter Deng Jingqun and Cai Jinyi) On the morning of the 21st, Hunan Province participated in the Tokyo Olympic Games and the summary meeting of the 14th National Games was held in Changsha.Provincial Party CommitteesecretaryZhang Qingwei met with the award-winning athletes, coaches and staff who returned from the honor and took a group photo.Li Weiwei, Chairman of the Provincial Committee of the Chinese People’s Political Consultative Conference, Deputy of the Provincial Party CommitteesecretaryUlan participated.

(October 21, the provincial party committeesecretaryZhang Qingwei cordially met with the award-winning athletes, coaches and staff of our province participating in the Tokyo Olympics and the 14th National Games. )

Provincial leaders such as Zhang Qingwei came to everyone and talked cordially with athletes such as Pang Qianyu, Chen Lijun, Hou Zhihui, Sun Wenyan, Liao Qiuyun, Zhang Liang, Wang Yuwei, Zhou Qian, etc., and asked them with concern about their training and participation, physical health, and treatment guarantee.

Zhang Qingwei, on behalf of the Provincial Party Committee, Provincial People’s Congress, Provincial Government, and Provincial Political Consultative Conference, extended warm congratulations and cordial greetings to all athletes, coaches and staff. He said that in the Tokyo Olympics, Sanxiang athletes won a total of 2 golds, 5 silvers and 3 bronzes, winning honors for the motherland, hometown and people; at the 14th National Games, they won a total of 25 golds, 13 silvers and 9 bronzes. , Created the best results in the history of Hunan National Games participation, and achieved both spiritual civilization and sports performance. Athletes and coaches struggled tenaciously and surpassed themselves in the arena. They have achieved their level, style, and spirit. They vividly interpret the Olympic spirit and Chinese sports spirit, and show the spirit of the children of Huxiang. The people of the whole province are proud and proud of you. 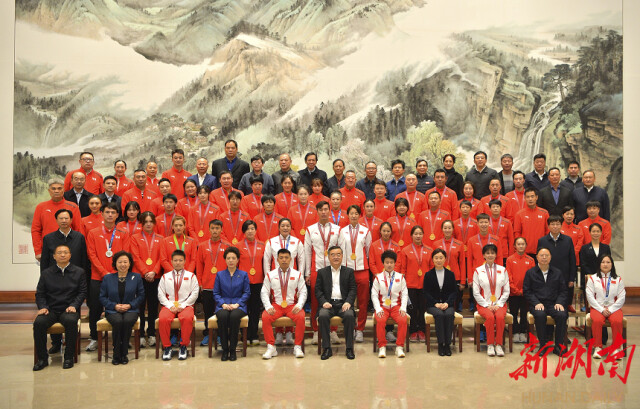 (October 21, the provincial party committeesecretaryZhang Qingwei took a group photo with the award-winning athletes, coaches and staff of our province participating in the Tokyo Olympics and the 14th National Games. The above pictures are all photos by Tang Jun, an all-media reporter of Hunan Daily)

Zhang Qingwei pointed out that XiNearly flattotalsecretaryAttaches great importance to sports work, has made important speeches and instructions on sports work and building a sports power on many occasions, personally attended the opening ceremony of the 14th National Games, and met with national sports advanced units and individual representatives, and Chinese sports representatives for the Tokyo Olympics Mission and so on.We have to put XiNearly flattotalsecretaryHis cordial care has been transformed into a strong motivation to do a good job in various training and competitions, and create brilliance in the new arena. I hope everyone will always maintain a united and hard-working style, cherish honor, make persistent efforts, scientifically train and prepare for battles, maintain a good competitive state, continue to defeat, break through, and climb the peak, and make new achievements and new contributions for Hunan in major international and domestic competitions. Give full play to the role of demonstration and lead, be a good “promotion ambassador” and “star coach” of national fitness, enter the campus in phases and batches to interact with young people, encourage young people to actively participate in various sports, promote the deepening of the integration of sports and education, and promote the Olympics for the masses. Enthusiasm and national sports enthusiasm are transformed into the internal driving force of national fitness, scientifically release new kinetic energy for the development of national fitness, and accelerate the construction of healthy Hunan. Vigorously promote the Chinese sports spirit, spread sports culture, and guide the broad masses of cadres and the masses to follow the example of athletes in their respective positions and strive for excellence in their respective positions, so as to make concerted efforts and unremitting efforts to accelerate the construction of a modern new Hunan.

Zhang Qingwei pointed out that it is necessary to in-depth study and implementNearly flattotalsecretaryImportant speech on sports work, important instruction spirit, integrate sports into the overall situation of the modernization of new Hunan, promote the coordinated development of mass sports, competitive sports, sports industry, and sports culture, support and serve the Beijing Winter Olympics, and continue to promote high-quality sports develop. Relevant departments should pay more attention to the growth of athletes and coaches, provide high-quality guarantees attentively, widely publicize their advanced deeds, and consolidate the strong joint force of building a strong sports province and healthy Hunan.

Xie Weijiang pointed out at the summary meeting that it is necessary to take the victory of the Tokyo Olympics and the 14th National Games as a new starting point to further promote the implementation of the national fitness strategy in Hunan, enhance the comprehensive strength of Hunan’s competitive sports, and stimulate the vitality of Hunan’s sports industry. , Consolidate the foundation for the development of sports in Hunan.

The person in charge of the Provincial Sports Bureau introduced the participation situation in Hunan Province, and the athlete representative Hou Zhihui and the coach representative Song Liangyou made speeches.

Thai futsal hopes to detain only 7...