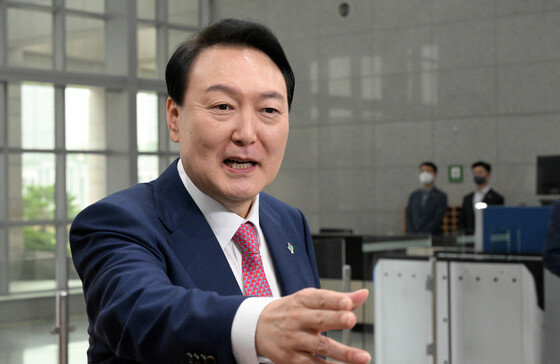 President Yun Seok-yeol is asking questions from reporters as he arrives at the Yongsan Presidential Office on the morning of the 23rd. President’s Office Photo Reporters

It seems that President Yoon Seok-yeol entered the ‘hard work (studying hard) mode’ with a minimal official schedule ahead of the NATO summit to be held in Madrid, Spain from the 29th to the 30th.

President Yoon did not set an official schedule on the 23rd, and minimized the schedule for the 24th.

It is reported that President Yoon is preparing for a bilateral meeting to discuss economic issues such as nuclear power plants, semiconductors, new and renewable energy, and defense projects with the participating countries of the NATO summit before departure, as well as the hosting of the 2030 Busan Expo and cooperation on the North Korean nuclear issue.

An official from the National Security Office said, “About 10 bilateral talks are currently being pursued.” “We will meet with the European Parliament (EU) Standing Chair and the Executive Chairman together to promote bilateral talks with Europe, and with major European countries such as Poland, the Czech Republic, Denmark and the Netherlands. Applications are also coming in from other regions, so I plan to put (the schedule of the bilateral talks) in a tight and dense manner over three days,” he said.

“For example, there is a demand for nuclear power, so the economic cooperation package is important for us strategically,” the official said.

It is also known that President Yoon will seek cooperation from NATO members on the North Korean nuclear issue.

The official said, “President Yoon will have an opportunity to speak and discuss for about three minutes at a joint session between NATO member countries and partner countries, and he will demonstrate North Korea’s strong will for denuclearization.”