After Kim Tae-hyung took office, there was no winning season… 1 win and 15 losses Sumo-do
The first ranking reversal of the year… If Doosan is eliminated in the first round, the road to victory is smooth.

[마이데일리 = 이석희 기자]LG’s slogan this season is ‘WIN NOW’. It contains the story of not being able to win the Korean Series in 27 years. LG last won the KS in 1994. While Jamsil rival Doosan won 5 times and business rival Samsung won 7 times, LG was just watching.

The alcohol that the late Chairman Bon-moo Koo used to drink when he won the KS is buried at the Champions Park in Icheon, Gyeonggi-do. Thanks to this (?), the maturation period was 27 years.

But this year, the opportunity is finally here. The final ranking has not been confirmed, but there is one comforting thing. 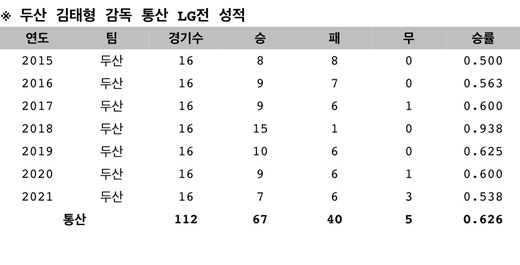 That is, Doosan, especially Doosan, led by manager Kim Tae-hyung, is behind LG for the first time in the leaderboards. LG is at least 3rd, while Doosan is 4th at best.

After Kim Tae-hyung took over as manager, LG’s self-esteem was greatly wrinkled. Jamsil rival Doosan has won the Korean Series three times (2015, 2016, 2019) and runner-up three times (2017, 2018, 2020) since 2015 when Kim Tae-hyung took office. During his six years in office, he made a brilliant history of winning or runner-up in the KS. Regardless of the Pannuntrace ranking, if they make it to the postseason, they are the least runner-up.

LG’s contribution (?) was huge for Kim Tae-hyung’s success. Since taking office in 2015, coach Kim Tae-hyung has never given up a winning season in a match. In the first year alone, they recorded 8 wins and 8 losses. This year, they had 7 wins, 6 losses and 3 draws.

In particular, in 2018, he set a phenomenal record of 15 wins, 1 loss and a win rate of 93%. LG had a season where their pride was crumpled as much as it was crumpled.

Now all that’s left is the PS battle. Doosan is highly likely to face SSG. If LG wins the final match of the season and Samsung and KT lose at the same time, it will be perfect if they take first place in the regular season.

However, if they finish third as they are now, LG will be able to see Doosan and SSG’s best-of-three semi-playoffs a bit leisurely. Of course, LG, who dreams of winning the KS this year, probably wants SSG to defeat Doosan.

This is because manager Kim Tae-hyeong is very strong in the postseason and considers LG as a good opponent. Although the record against SSG this year is inferior with 6 wins, 1 draws and 9 losses.