In addition, Song Kang-ho and Lee Byung-hun, the main actors of the movie “Emergency Declaration”, attended the closing ceremony of the 74th Cannes Film Festival held in Cannes, France on the 17th (local time) and finished all the schedules successfully.

The closing ceremony of the 74th Cannes Film Festival was held at the Lumière Grand Theater in Cannes, France. The Lumière Grand Theater, which held the world premiere of ‘Emergency Declaration’ at 10 pm on the 16th, was filled with filmmakers and foreign media from all over the world who wanted to commemorate the closing of the Cannes Film Festival, proving the local hot atmosphere.

When director Han Jae-rim’s disaster film ‘Emergency Declaration’ was screened in the non-competitive section, a standing ovation for about 10 minutes came out and it became a topic of discussion in the local area. The film’s protagonist, Song Kang-ho, served as a judge and Lee Byung-hun as a presenter.

As a jury member of this year’s film festival, Song Kang-ho has had a busier schedule than ever. Even at the closing ceremony, which marked the end of the festival, Song Kang-ho filled the stage as a member of the jury composed of prominent figures in the world film industry. The filmmakers who won the Cannes trophy this year were greeted with a bright smile and applause of encouragement. 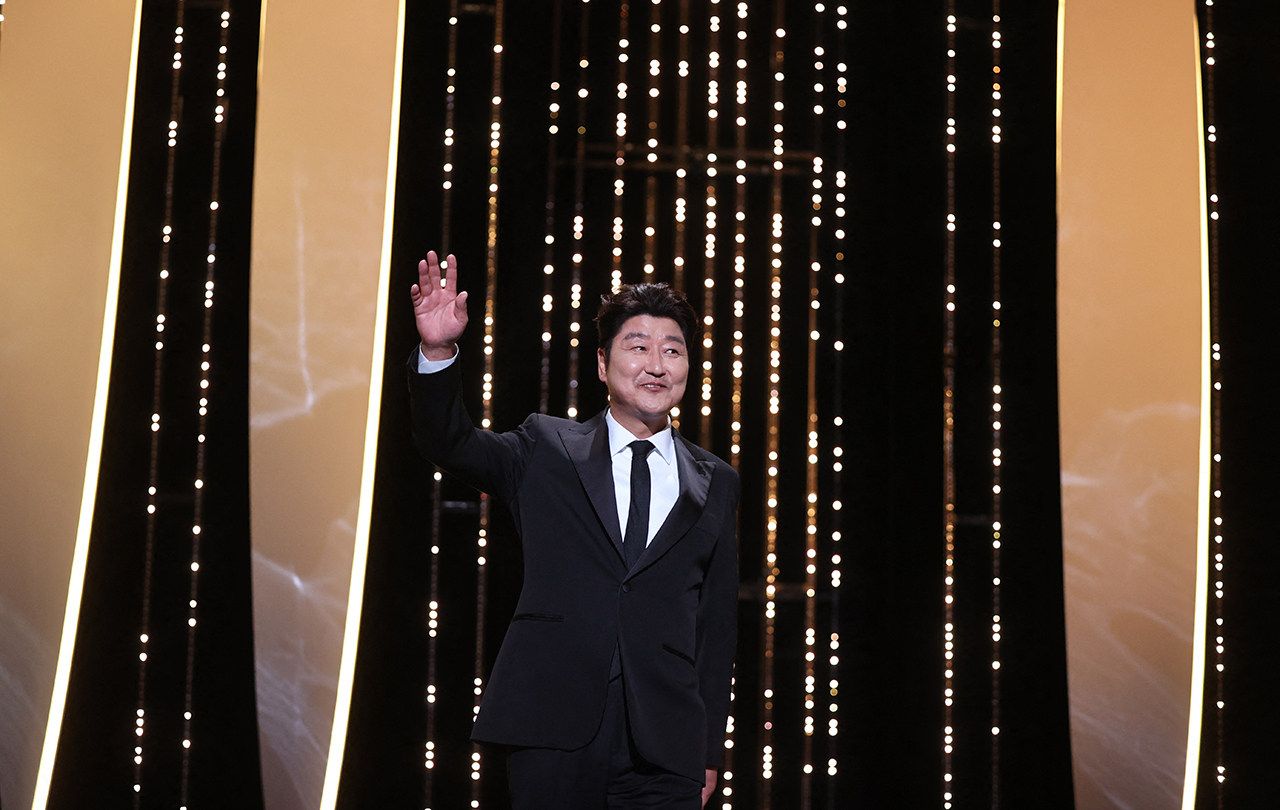 Lee Byung-hun was called as the presenter of the Best Actress Award, which is a major part of the awards ceremony. Lee Byung-hun, who went on stage with a relaxed smile, gave a greeting to the audience in French before the awards ceremony, drawing a warm response. “I am very happy to be back in Cannes after a long time,” he said. What I’m more than happy to say is that the film festival, which had stopped, has started again.” As soon as he finished his French greetings, the audience erupted in applause.

Afterwards, Lee Byung-hun, who continued his feelings as a presenter at the Cannes Film Festival in English, said, “This year’s film festival is very special to me. Director Bong Joon-ho, who opened the film festival, and actor Song Kang-ho, this year’s jury, are my colleagues, and Spike Lee, the chairman of the jury, is my colleague. Because they have the same last name,” he said, making the audience laugh.

On this day, Lee Byung-hun gave Renat Reinzeb the Best Actress Award to Renat Reinzeb, the female lead in the competition section of the 74th Cannes Film Festival, invited to The WORST PERSON IN THE WORLD (Director Joachim Trier).

The attendance of Song Kang-ho and Lee Byung-hun, the protagonists of ‘Emergency Declaration’, is significant as it foreshadows the presence of Korean films that will continue even in the post-pandemic era. Actor Song Kang-ho, who previously swept the Cannes Film Festival with Parasite, was appointed as a judge in the competition section of the 74th Cannes Film Festival and actively participated in all schedules of the film festival.

Following the experience of being the first Korean actor to be presented as a presenter at the 88th American Academy Awards held in 2016, Lee Byung-hun became the first Korean actor to attend the Cannes Film Festival as a presenter in the competition section, the highlight of the closing ceremony. The decoration of the closing ceremony finale by two Korea’s representative actors proved the heightened global interest in Korean films.

The movie “Emergency Declaration” is a reality aviation disaster film that takes place over an airplane that has declared an unconditional landing in the face of an unprecedented disaster situation. ‘Emergency Declaration’, which proved to be one of the most talked-about films of this year’s Cannes Film Festival, received a warm response through its first official screening, such as “an intense yet very modern disaster film” and “a smart film that penetrates society with good scenes full of tension”. It heralds the birth of an anticipated masterpiece.

Meanwhile, at the Cannes Film Festival, director Bong Joon-ho, who won the Palme d’Or for ‘Parasite’ in Korea in 2019, attended the opening ceremony as a special guest. Director Hong Sang-soo’s new film ‘In Front of Your Face’ was screened in the Cannes Premiere section, which was newly established this year, and director Yoon Dae-won’s ‘Cicada’, a graduation work from the Korea National University of Arts, won the second prize in the Cine Foundation category, a student competition.

Open the history of “Phra Phai Ramida”, a...