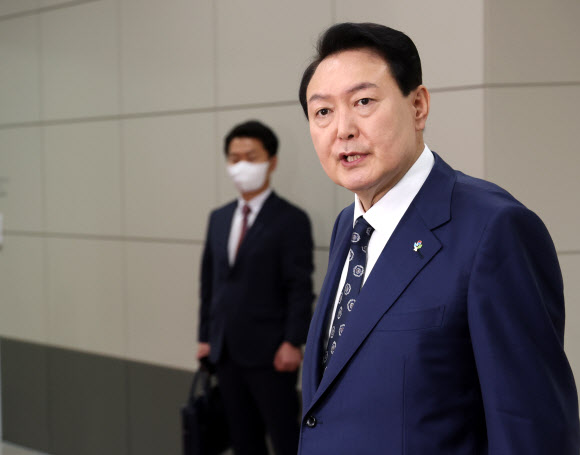 Prefer multilateral talks ahead of national elections
Bilateral talks between 尹 and Kishida likely to be delayed
“I oppose the change of the status quo in China in the East and South China Seas
Discussion on support measures for Pacific island countries, etc.”

▲ President Yoon Seok-yeol answers questions from reporters as he arrives at the presidential office in Yongsan, Seoul on the morning of the 20th. 2022.6.20 Yonhap News

The presidential office announced on the 20th that it had received a proposal from Japan to hold a four-nation summit with South Korea, Australia and New Zealand participating in the NATO (North Atlantic Treaty Organization) summit.

An official from the presidential office explained in a meeting with reporters on the same day, “The proposal for a four-nation summit has been received from the Japanese side and is currently under review by the National Security Office.” In relation to the previous report by the Japanese Yomiuri Shimbun that “the Japanese government is considering holding a summit meeting with Korea, Japan, Australia, and New Zealand in NATO,” this confirms the fact that the proposal was actually received from Japan.

The NATO summit, the first overseas trip of President Yoon Seok-yeol, will be held in Madrid, Spain from the 29th to the 30th, and 30 member countries, including South Korea and Japan, will be invited to attend as ‘observers’. In particular, attention has been focused on whether the Korea-Japan summit will be held on the NATO stage, as the Yun Seok-yeol administration has repeatedly expressed its will to restore relations between Korea and Japan.

However, it is analyzed that the Japanese government prefers multilateral talks rather than bilateral talks with South Korea in consideration of the domestic political situation, such as the House of Councilors election scheduled for the 10th of next month. In a situation where Korea-Japan relations have deteriorated rapidly due to problems in the past, it is observed that Japanese Prime Minister Fumio Kishida does not believe that meeting with President Yoon will help the election.

On the other hand, since the summit between Asia-Pacific countries has the character of checking China, the Japanese government has little domestic political burden. The Yomiuri Shimbun reported, “The leaders of the four countries are expected to express their opposition to attempts to unilaterally change the status quo in the East and South China Seas with China in mind. will be,” he said. The newspaper also analyzed, “The four countries have confirmed cooperation and have the purpose of promoting a ‘free and open Indo-Pacific'” and “It is also intended to increase interest in Asia to NATO countries, which are focusing on responding to the situation in Ukraine.” did.

When the four-nation summit is held, President Yoon and Prime Minister Kishida will meet face-to-face for the first time, but it is far from an official bilateral meeting. In this case, it is expected that the leaders of South Korea and Japan will meet for the first time through a conversation or a brief informal meeting.

Accordingly, the first South Korea-Japan summit under the Yun Seok-yeol administration is expected to be delayed after the NATO summit. The Japanese government is adhering to the position that South Korea must provide a solution to the issue of compensation for forced mobilization workers during the Japanese colonial period. A high-ranking Japanese government official told the Yomiuri Shimbun that “the environment is not ready (to hold the Korea-Japan summit).”

Seeking innovation and development together, discussing the grand plan of Xiangxiang, Party and government leaders of Hunan Province and representatives of academicians and experts have a discussion
Posted onJune 26, 2022June 26, 2022