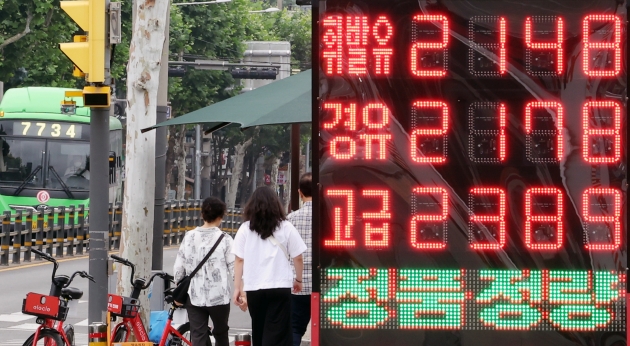 The government has decided to expand the extent of the fuel tax cut by the end of the year to the maximum allowed by law, and to double the public transportation credit card income deduction rate from 40% to 80% in the second half of the year.

Deputy Prime Minister and Minister of Strategy and Finance Choo Kyung-ho held an emergency economy ministers meeting at the government complex in Seoul on the 19th and announced these details.

The government is currently implementing a temporary 30% cut on gasoline, diesel, and LPG butane fuel taxes, which is the largest ever, and will be raised to 37%. Deputy Prime Minister Chu said, “We will increase the range of oil tax cuts from July to the end of the year to 37%, the maximum allowed by law, to induce a reduction in the sale price of petroleum products.”

Read Also  Corona 19: 'Eating treatment' prescribed from the 14th... Can non-vaccinated people get a prescription?

“In the second half of the year, the credit card income deduction rate for public transportation will be doubled from the current 40% to 80% in order to promote the use of public transportation due to high oil prices and reduce the burden on ordinary people,” said Deputy Prime Minister Choo.

He said, “To alleviate the burden of fuel costs on the freight and transportation industry, the standard unit price for subsidies linked to diesel oil will be reduced by 50 won from 1,750 won per liter to 1,700 won per liter.” The diesel oil price subsidy is paid in a way that the government subsidizes half of the price of diesel that exceeds the standard price.

Deputy Prime Minister Chu said, “We will reduce the current import tariff from 3% to 0% by applying quota tariffs on domestic jet fuel, thereby easing the pressure to increase domestic fares.”

Regarding agricultural and livestock products and essential food, he emphasized, “We will monitor market trends on a daily basis, focusing on items with rising prices, and stabilize the market by responding in a timely manner through supply and demand management such as release of stockpiles and emergency imports, as well as price discounts.”

He added, “We will review additional measures to stabilize supply and demand, such as expanding the items subject to quota tariffs while observing the market situation.”

Deputy Prime Minister Choo said, “In a severe situation like now, the economic team will not let go of tension for a moment.” He added, “Under the responsibility of each ministry, we check the price and supply and demand trends for key items in the area under their jurisdiction and respond immediately if any signs of anxiety are detected. I will do it,” he said.