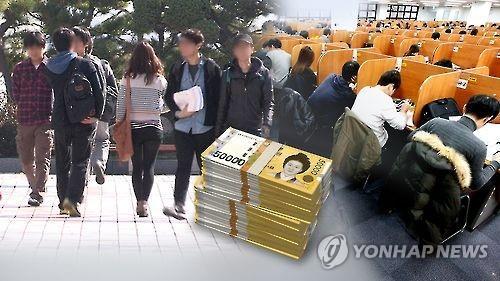 Deputy Minister of Education Jang Sang-yoon said that a consensus was formed between the education authorities and the financial authorities on the need for direct and indirect easing of regulations on university tuition fees.

As this suggests the possibility of a college tuition increase, which has been tied up for 14 years since 2009, attention is focused on the timing and method.

Deputy Minister Jang Sang-yoon said this while attending a seminar for university presidents hosted by the Korea Association for University Education (Daegyohyup) held at the Inter-Burgo Hotel in Suseong-gu, Daegu on the 23rd.

Deputy Minister Jang said, “The regulation of tuition is legally stipulated (so that it can be increased), but it was regulated in an indirect way in connection with the National Scholarship Type II. “he mentioned.

However, he said, “It is not a problem that can be solved by just lifting the regulations,” he said. will come to a conclusion,” he added.

In the mid-2000s, when it was pointed out that the steep rise in university tuition fees increased the burden on students and parents, the government added the ‘tuition increase rate’ to the evaluation item for the university work scholarship program in 2009.

In fact, it was induced to freeze university tuition by linking the government’s financial support project with a tuition increase.

In 2010, the Higher Education Act was revised to allow each university to raise tuition up to 1.5 times the average rate of consumer price inflation over the past three years.

However, even after that, each university has to freeze or reduce tuition to support the National Scholarship Type II, so there are few universities that give up financial support and raise tuition.

Universities have pointed out that many universities, especially local private universities, are in crisis of exams because the government has virtually frozen tuition and has not made stable financial investments in the higher education sector.

President No-Jun Park of Anyang University, who attended the seminar, said, “Because tuition has been frozen for 14 years, it is difficult to make a living for universities that corporations cannot help. I hope I can raise them),” he said.

Meanwhile, Vice Minister Jang Sang-yoon announced that the university’s basic competency diagnosis project, which had been criticized for a uniform evaluation using financial support as a weapon, would be completely reorganized within this year.

Vice Minister Jang said, “We should stop uniform evaluation and provide financial support to universities other than ‘limited universities’ (we are discussing).” method),” he said.

He added, “If there is a willingness to go beyond the basic level and innovate, we will support them to act autonomously, evaluate whether the proposed results are being achieved, and proceed with the evaluation toward whether to support more or not.”

Deputy Minister Jang said, “In case of disposing of property for the purpose of structural improvement or consolidation with other universities, Hangye University will be given an opportunity for rehabilitation, such as by granting special regulatory exceptions. are being reviewed,” he said.

Regarding nurturing talent in the high-tech field, which has become an issue recently, he said, “If the high-tech graduate school meets the teacher retention rate (teachers, teachers, property for profit, etc.) ) is under review by the Ministry of Legislation,” he said.

Regarding the regional higher education committee, which was decided to be newly established to foster local talent, he expressed a somewhat reserved position, saying, “We will not create a committee uniformly in all regions of the non-metropolitan area and promote it in a top-down manner.”

Meanwhile, at this seminar, the presidents of non-metropolitan universities voiced their voices about the difficulties of recruiting new students and managing finances.

Lee Byung-soo, president of Koshin University, said, “As someone at a local university in relation to President Yoon Seok-yeol’s national task, ‘Now is the era of local universities,’ I have skeptical eyes.” People can be quite disappointed.”

Park Maeng-soo, President of Wonkwang University, said, “The presidents of universities in non-metropolitan areas are perplexed because the proposals prepared by the Daekyo Association over the past three to four years have been omitted (not reflected in the policy). “There should be a policy to maintain the education ecosystem,” he said.